Security glass is a glass providing protection against various forms of aggression, characterized by increased resistance to burglary (the so-called anti-burglary glass). It is used wherever there is a need to protect a given facility while maintaining unchanged facade aesthetics, eliminating grates, blinds or shutters. The protective functions are provided by laminated glass of a specific structure, mounted in the window frame. The anti-burglary protection plays a very important role not only in housing construction, but also in commercial construction or in public buildings. Such glass should survive the intruder's attack or acts of vandalism.
EN 356:2000 Standard “Glass in building. Security glazing. Testing and classification of resistance against manual attack” specifies eight resistance classes. 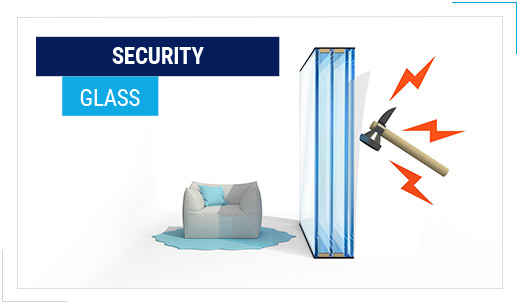 The tests helping to classify glass to a given group are performed by:

Depending on the number and thickness of glass panes used and the type of the foil used, the laminated glass provides the specified protection class (P1 to P8). Products with lower strength (P1 and P2 classes) guarantee safety (in the event of breaking), those with higher strength – safety and protection (against burglary, acts of vandalism, and even firearms). For single-family houses P3, P4 or P5 class glass is most commonly chosen, while higher classes are used in banks and other facilities of this types.
Sample units with safety and security glass: